At the beginning of June, approximately 10,000 cat enthusiasts descended upon The Reef in Los Angeles to partake in the madness and joy of CatConLA for two days. There was no shortage of shopping potential in the form of beautiful cat arts and crafts, clothing and toys (for both humans and cats), cat furniture, carriers, innovations in food and litter. There were also booths whose aim was awareness to cat-related causes such as spay/neuter programs, an adoption center and The Paw Project whose aim is to ban declawing in the US - as well as guest speakers on a range of topics and celebricats. Before even entering the venue, Sauerkraut Kitty was spotted in her shark ensemble inside her tour RV.

Below is Zoomer Kitty - a robotic kitty that interacts with users not unlike a real kitty.

The artwork of Lili Chin

An artist who created sculptural woodblock printed cats on fabric into an unbelievable gown.

Power cat-couple - owner of celebricat Pudge the Cat and her boyfriend, the founder of @cat_of_instagram

Paintings from Chaos in Color. Full list of vendors here

There was plenty of time for socializing with friends who came from all over the country (and other countries!) after having "met" previously only on Instagram. Tori of Purr and Roar came in from Toronto.

A bunch of friends from all over California got together for lunch with their "FlatCats" - cardboard mounted cats used for traveling photo ops, since actual cats were not permitted entry at CatCon.

Saturday night after day one of the Con, the Hotel Figueroa hosted MeowMeet, organized by SunglassCat and Stovepipe the traveling cat's humans. Actual cats were welcome there!

First off, Omar Little the Sphynx.

Sir Sorbet in his tux.

Though there may have been some underestimating of attendance that caused some snags, Con-goes kept the overall the spirit fiercely enthusiastic, positive, and accepting. Despite the "crazy cat lady" trope, there were both men and women of all ages, equally passionate in their love of cats. It was hugely entertaining and hopefully we can be a part of next year's Con!

Post Con, The FlatCats took over LA for a week, starting in Venice, where they met P22, a famed LA mountain lion FlatCat. As well as another wheatpaste style street art FlatCat.

The FlatCats visited both The Getty Center and the Getty Villa and things got a bit artful.

Stinky. Even stinkier was the abandoned zoo in Griffith Park.

They also checked out some cool street art and cool spots in downtown LA, including theh Bradbury Building and The Last Bookstore.

On their last day, the visited their dear instagram friend @samsam_ferdinand and went to the LA Arboretum in Pasadena.

Despite the June Gloom, there was never a dull moment. Thanks for the love Los Angeles! 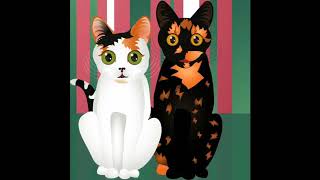 ZodiaCats are coming to town

Our Interview with Catster